A project management Process delivering ‘high-value-first’ progress towards the currently defined and approved Requirements, and then seeking to obtain, and use, realistic, early feedback.
Alternative Names

None of the following words are perfect synonyms, but since each Author and company has a long list of extremely similar features that make up these Processes, they are close enough.
Rapid Delivery Management (Acronym: RDM), Result Delivery (These synonyms are used within Jet Propulsion Labs. [SPUCK93]
Synch-and-stabilize or Milestone Approach (These synonyms are used within Microsoft [CUSUMANO95].

Key components include:
• frequent delivery of System changes (Evo-Steps)
• Evo-Steps delivered to Stakeholders for real use
• feedback obtained from Stakeholders to determine next Evo-Step(s)
• the existing System is used as the initial System base
• small steps (ideally between 2%-5% of total project financial Cost and time)
• steps with highest value and benefit-to-cost ratios given highest Priority for delivery
• feedback used ‘immediately’ to modify future plans and Requirements and, also to decide on the next step
• total Systems approach (‘anything that helps’)
• results-orientation (‘delivering the results’ is prime concern) 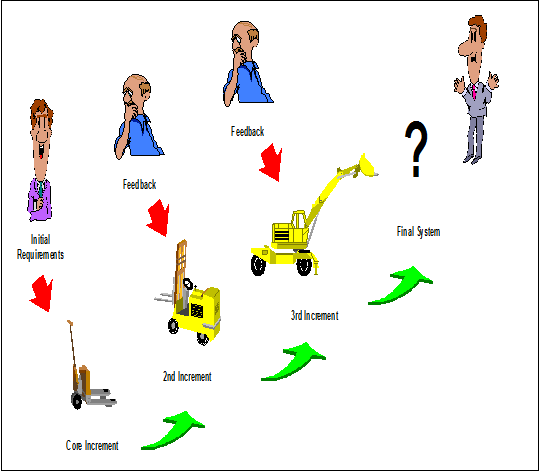 Figure *355: Conceptual view of Evo [HUMMEL02]. Notice that the design changes over time: it does not just get ‘incremented’. Of course, it is not a Requirement that the design has to fundamentally change at each step! Compare with Figure *318 in Incremental-Development *318.

Notice that Scrum and most other populat Agile methods are Incremental not Evolutionary (potentially shippable code, not value to Stakeholders). They can of cause be refocused to become Evolutionary.

Historical Note: Evolutionary-Project-Management had an early large-scale Documented use in the Cleanroom techniques used by Harlan Mills within IBM in the 1970s [MILLS80]. [LARMAN03] gives a comprehensive history of the method.

This Concept entered by Adore