It is a method for Changing a defined Work-Process to reflect measurably better Process. The Concept was developed by Walter Shewhart and taught by W. Edwards Deming [DELAVIGNE94, DEMING86, DEMING93]. 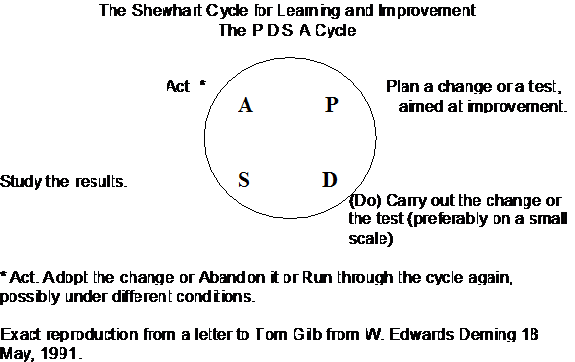 The PDSA-Cycle involves the following:

• decide on an improvement and how to accomplish it. (Plan)
• carry out the improvement as planned (Do)
• gather data about costs and resulting improvements and Side-Effects, analyse the data and decide what it Means (Study, sometimes called “check”)
• adopt the change as is, or try again in a better way (Act)

This is enabled by Standardizing and stabilizing a target Process (meaning; “wherever you carry out the improvement”) so that the effects of any Process changes can be credibly observed.

This Concept entered by Diane O'Brien.