a Parameter that specifies a historical experience, a Benchmark.
Alternative Names

Past-Level is usually shortened to Past.
A Past-Level states a historical numeric Level, on a defined Quantification-Scale, under specified Conditions [time, place, event] for a Scalar Attribute.
The Past can be any reference point of interest. It can be used to express a Product-Function, Product-Value Level, Development-Resource, or Solution of an old or existing System.
The most common use of the Past-Level is to reference how well a previous Product did along the same Quantification-Scale.

It can be essential to know where along the Quantification-Scale we and our Stakeholders are (Past-Level), Before we decide where we want to be in the future (Goal-Level). Specifying the Past Level gives that Benchmark and communicates it clearly. The Pest-Level is not a Requirement in-itself, it can be part of describing the development challenge, to move from where we are, the Past-Level, to where we want to be, the Goal-Level. 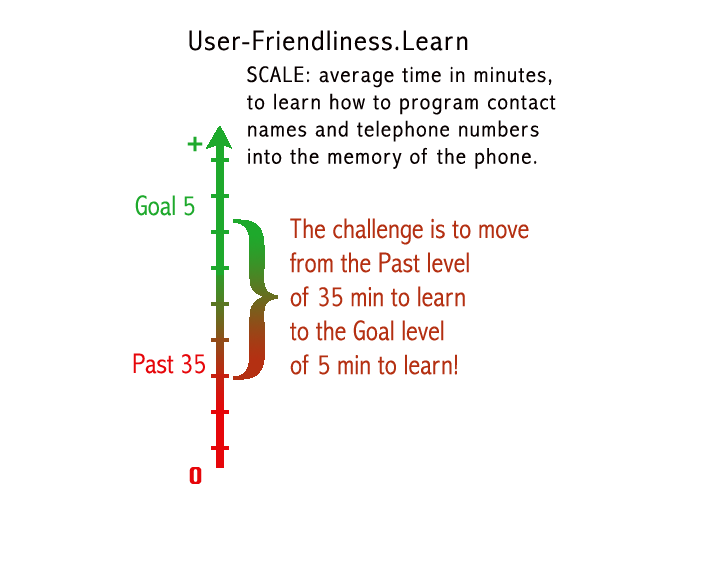 Scale: average time in minutes, to learn how to program contact names and telephone numbers into the memory of the phone.

1. Past values are stated to give us some interesting Benchmark Levels for our old System(s) and our competitors” Systems.

2. Even “current” values should be expressed using Past, because immediately they are stated, they are “Past” values. Qualifiers will make plain the currency of a specification

Rationale: If we did not take the trouble to analyze and specify the Past values then we might not set reasonable targets. Unintentionally, targets might even be specified worse than they were in the Past.

We used to call Past for Now, but realized that Now does not last for long :-)

This Concept entered by Kai.